The sun was still deep in slumber when we settled on a downtown cafe for breakfast. We tasted the glory of the renown city before we saw it, sipping strong coffee and eating buttery croissants. When the sun rolled out of bed we were more than ready to explore the historic surroundings. Down to the corner we strode, the adjacent street now pulsed with commuter traffic. We rounded it and stopped. There it stood, broad and secure in its footing, stretching skyward beyond all other rivals in Paris.

The tower that Alexandre-Gustave Eiffel built was to form the entrance to the World’s Fair of 1889, celebrating the centennial of the French Revolution. City planners had thought the tower would serve as a temporary monument but the invention of radiotelegraphy saved this 1000 ft. latticework from destruction. Not only does Eiffel’s work continues to play a significant role in communication transmissions, it has become an iconic structure attracting countless tourists like us. 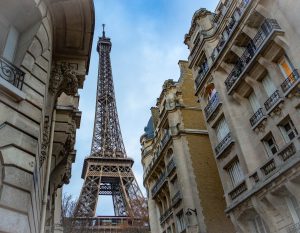 “City planners” during the time of the Old Testament days did not erect towers of intricate and ornate wrought iron as monuments. They built their keeps with stone and wood to ward off attack and to provide a place of refuge against siege.

In Proverbs, we read,

The name of the Lord is a fortified tower; the righteous run to it and are safe. (Pr 18:10 NIV)

Here the writer uses the image of a ‘fortified tower’ to depict the strength and security founded within the person and presence of the Lord Almighty. Those who desire to be in right relationship with God have access to this tower. They can enter and find protection against threat and attack.

Don’t miss that this tower does not come to them. It does not envelop them when danger presents itself. God’s power and presence, the refuge to be found within his care, awaits the one who will run to it. When we are besieged, we can choose to battle outside of God’s provision, outside of the confines of his protection. Our knowledge that the Lord is a fortified tower does not guarantee our safety.  It is when we decide to run to the tower that we find his security.

James puts it this way, “Come near to God and he will come near to you. Wash your hands, you sinners, and purify your hearts, you double-minded.” (James 4:8 NIV)

When you feel threatened what helps you run to God?