The three women knew where the body of Jesus had been laid to rest. They had been eyewitnesses. They had seen Joseph of Arimathea lay out the shrouded corpse in the tomb and seal it with a rock on the Friday we call Good. 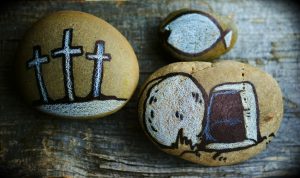 Now it was Sunday and these same women were seeking Jesus. They had bought spices, they had plans to anointed his body. It would be an act of devotion. They were seeking Jesus where he had been laid out. But their venture came up empty. The tomb was empty. Jesus was not where they had left him!

How often do our acts of devotion have us seeking Jesus where we left him. How often do we seek him as one laid out as a religious figurehead or a moral teacher or a divine first-responder? But we come up empty. Those categories cannot entomb Jesus.

The women’s earth-bound expectations were rocked by the stone that had moved and the Lord who was missing. The angelic messenger helped them think things through. Jesus is not laid out in the tomb because God has raised him to life, just as Jesus foretold.

Jesus’ resurrection has opened up a new way of living for all those that will follow him. This new way is marked by God’s loving reign and rule, breaking into a broken world and reformating hearts with grace, mercy and justice.

Following Jesus is not a static devotion but a dynamic apprenticeship. As we trust Jesus like a child, he promises to bless us with his guiding presence and his enabling power. Our brokenness is healed and we become his agents in bringing the same kind of healing to others.

The Holy Spirit makes real to us the presence and power of the Risen Lord. Our rock-be-rolled faith is manifested in our Spirit-led life.

Our next sermon series will be about the work of the promised Spirit in the life of a follower of Jesus. What questions do you have about that? Leave them in the comments.

Previous
Have You Been Hosted By Jesus Lately?
Next
Waiting Is Key to Following