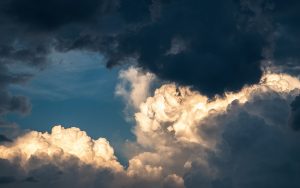 Frisbee at the beach was my summer sport of choice. Now decades later it is my sport of chance. By that I mean there is a chance my body might place me in the vicinity of the incoming disc. My legs prefer to debate such a proposal, only reaching consensus on the motion long after the flying object has cleared our airspace. It was this vain activity that occupied me and amused my sons as hungry storm clouds swallowed the afternoon sunshine. We had not invited them, but like rude party-crashers, they pushed in and crowded around our picnic gathering.

The elusive disk fluttered, faltered and was grounded by the menacing bluster. A family council was convened, the issue was clear, do we retreat or entrench? Indecisiveness gave legs to the bravado of the minority who claimed we were a people who would not be frightened off by a summer sprinkle. While that notion was gathering support, a heavenly deluge sent the majority burrowing to the underneath side of the closest picnic table. Whatever we claimed, we were a people that did not like to get drenched. 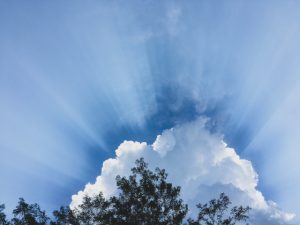 The immediacy of the storm was real. It was dark, gusty and very wet. Immediacy is the vantage point from which we first evaluate our circumstances, but it should not be the last. Although a brooding gang of clouds had mugged the sunshine, the sun was unharmed. Its brilliance had not been diminished.

No, it was our perception of its presence that the storm impaired. Unwanted precipitation of grand proportions had left us hunched over, under tables, staring down. But there in the heavens, radiated a reality beyond the immediacy of wind and water. We needed to look up. Neither the droplets that meandered around our necks and down our backs nor the lakes that formed at our feet defined our true state. They were only the distraction, the big story was in the heavens. Unlike us, the sun was not hunkered down; it blazed on, declaring hope for the storm-stricken.

Shadows, wind and precipitation come in many forms. Health crisis, a broken relationship, uncertain economics to name three. The immediacy of their impact disrupt our equilibrium and increase our sense of vulnerability. But those initial reactions need not define us. If we look heavenward, we glimpse that God, unlike us, has not been tripped up or threatened by circumstances. His steadfast love, his mercy and grace, his compassion, all that and more remain ablaze in full force. Looking Godward enables us to see our troubles from a different vantage point. We are not alone and we will not be defeated. Our God is our hope, our safe place, He is our shepherd.

What helps you look Godward when circumstances are stormy?

Psalm 46:1–3 (NIV)
1 God is our refuge and strength,
an ever-present help in trouble.
2 Therefore we will not fear, though the earth give way
and the mountains fall into the heart of the sea,
3 though its waters roar and foam
and the mountains quake with their surging.