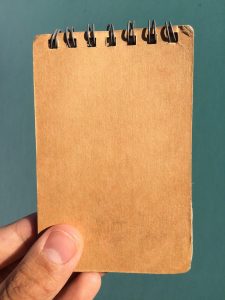 I had this pocket notebook. Before smartphones, it was my go-to organizer and reminder. In the warehouse where I worked, I used it to record employee’s payroll queries, phone messages, absentees and more.

On one occasion a warehouse worker was accused of a crime. The worker’s lawyer contacted me to serve as a potential witness. Why? Because of my notebook. It helped me recall the date in question with confidence. I was prepared to testify that the employee was at work at the time it was alleged he was involved in a crime. My testimony impacted that situation. They dropped the charges.

Sincere testimony can have a profound influence. Consider the account of the synagogue ruler Jairus (Mark 5:21-43). He came with the hope that if Jesus, the teacher, would lay his hands on his dying daughter that she would be healed and live. Jesus agreed to go with Jairus but was delayed by an encounter with a woman suffering from chronic bleeding.

Her situation is hopeless. Doctors have failed her, she is destitute, and her disease has completely ostracized her. She violates religious conventions and sneaks into the crowd that follows Jesus on his way to Jarius’ house. She reaches out and touches Jesus and is immediately healed.

Jesus is aware that he has healed this woman. He stops and makes persistent inquiries as to who touched him. Jesus wants the woman to realize that trusting in him is the source of the healing. Eventually, the woman comes forward and tells Jesus the whole truth.

At this point, news comes to Jairus that his daughter has died. Jairus’ hope that Jesus would lay his hands on her and heal her are dashed. But, Jairus has just heard the testimony of the women about her hopelessness and about how Jesus had healed her. Could Jesus do something for him in his hopeless situation?

Faith is Given a Boost

The testimony of the women becomes a catalyst toward faith in the life of Jairus. Jesus invites Jairus to keep believing. He does. Jairus continues to his home with Jesus and there Jesus does amazing things. 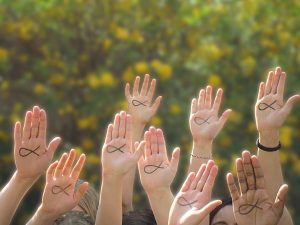 When God blesses us with help, with healing, with hope, he has made us into witnesses of his good work. Not only should we give him thanks, but, we should be ready to testify. Telling the whole truth about what God has done for us might serve as a catalyst for another who is struggling to trust in Jesus.

What do you think holds people back from testifying to the good works of God in their life?

Previous
Baptism - How can I Support My Child?
Next
PDAC in Four Words