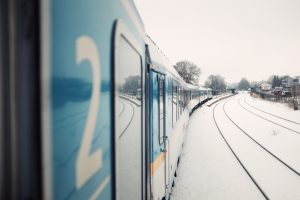 It was cheaper than flying and more manageable than driving twenty hours with a toddler. My mom and I took the train from Winnipeg to Toronto. I don’t remember much, except for the button. It was in our berth. When I pushed it, a man showed up. He asked my mom if there was anything she needed. She thanked him and said everything was fine.

Later, when I was bored, I pushed the button. Again he arrived inquiring how he could help. My mom seemed surprised. He seemed surprised she was surprised. I thought this was great. He left too soon. I pushed the button. He was back, but this time he was on to me. Like detective Poirot of Agatha Christie fame, he exposed me as the button-pusher. My mother turned and proclaimed the button was out of bounds, a new law was in force. I either obeyed or she would make sitting down difficult. The button lost its interest. 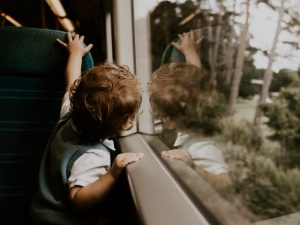 There were more interactions that took place on this grand journey but I don’t recall them. No doubt the ticket collector dropped by to ensure we had the proper fare. I did not paste that encounter into my cerebral scrapbook. What I did frame and tuck away secure is my recollection of the porter who popped up to help when I pushed the button. Oh, to be such a person!

God Almighty had chosen the Jewish nation as the people by which all the nations would be blessed. The Jews distorted this calling; instead of serving the nations, they segregated themselves from them. They twisted distinct dietary practices to create grounds to discriminate against Gentiles, forbidding table fellowship with non-Jews for fear of being defiled. One of their ancient authors writes, “Separate thyself from the nations, and eat not with them…all their ways are a pollution and an abomination and uncleanness” (Jub. 22:16).

Peter, while waiting on the mid-day meal has a vision in which a sheet is let down containing all sorts of creatures that were not part of the customary Jewish diet. A voice from heaven commands him to kill and eat (Act 10:12-13). Peter is quick to protest boasting that he has never eaten anything impure. The voice rebuffs Peter directing him not to call unclean what God has made clean. This happens three times, leaving Peter wondering what it all means.

God’s timing is stellar, a Gentile delegation arrives inviting Peter to come with them to the house of their master, a Roman centurion. Prompted by the Spirit, this kosher-abiding Jewish fisherman agrees to go. The next day Peter finds himself in the centurion’s house, surrounded by this man’s relatives and close friends, the sort of people that Peter would religiously avoid. The vision’s meaning becomes clear, Peter is not to call anyone impure that God has declared clean (Acts 10:28). All people are kosher!

Peter puts it this way to his host: “It makes no difference who you are or where you’re from—if you want God and are ready to do as he says, the door is open (Acts 10:35 MSG).”

God did not call his people to be ticket collectors checking to see if the adequate fare has been paid. Our job is not to keep certain people out of God’s Kingdom but to help all sorts find their way through the door that Jesus has opened. We are Gospel porters willing to respond again and again to calls for help.  Oh, to be such a person!

Photo by Flora Westbrook from Pexels