Grade 3 was a different year. They shunted part of our big class across to the Grade 4 room; they had more space. The teacher over there expected a lot. If you crossed her line, then she gave you a huge book to hold above your head. I wasn’t into weight training so the benefit of this exercise was lost on me.

There were, however, other methods that hit their mark. One was to cease upfront communication and go silent. When she was talking, I knew what I was ignoring but when she went silent I had to focus in to hear what it was, she wasn’t saying.

The Other Side Of Silence 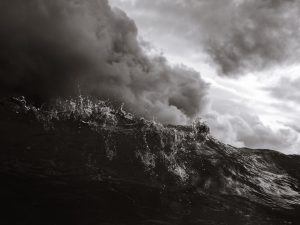 There are times Jesus made himself heard among the first disciples by going silent. He had organized a trip to the other side of the Sea of Galilee. Things got intense. The wind shrieked, the water seethed, and the sea began to flood the boat. The fisherman in the crowd had it covered, this wasn’t their first storm.

They bailed, then the rest bailed, but their combined output didn’t match the sea’s input. The math was simple, the conclusion startling, they were going to perish! And Jesus, what did he have to say? Nothing. He was quiet, asleep in the stern.

Jesus’ silence during the crisis got their attention. They, like me (and maybe you) had jumped to the wrong conclusion. The first disciples put it this way, “Teacher, don’t you care if we drown?” (Mk 4:38) Don’t we figure that silence is a sure indicator that God is indifferent to our plight? Jesus should be bailing with the rest of them. What else could be done?

This silence preceded a fresh demonstration of his power. Jesus did not bail, he stood and commanded the storm to be still. The calm he possessed while asleep is the calm he created once awake. It is the calm he desires to create in our hearts and minds when the elements oppose us.